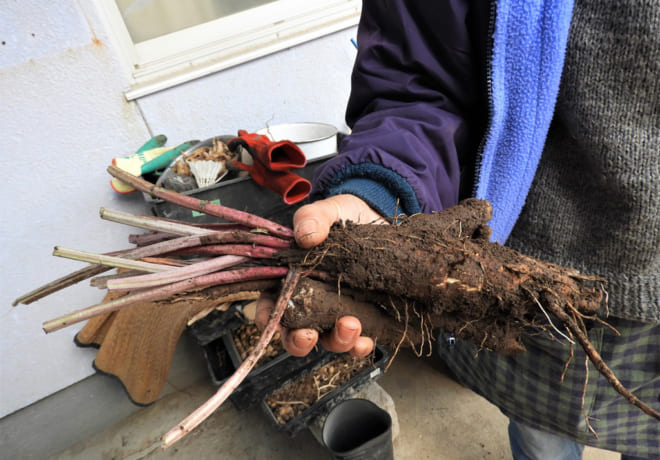 Today, I visited “Soyofuku Noun” (The farmland with a light breeze) for a homestay in Notsu. I heard it is bit different from “Obata no ie” which was a typical grandpa and grandma’s house.

When I enter the property of “Soyofuku Noun” I was welcomed by the clucking of chickens. Here, the Takamatsu family are trying to produce as much of their own food as possible and producing eggs is one aspect of this. I had heard that the Takamatsu family had moved to Notsu from outside of the prefecture, like others in the area who have come from big cities to the countryside. Now they are aiming for self‐sufficiency for their food. Both father of the house, Ken-san and mother of the house, Mie-san were from Saitama prefecture, located right next to Tokyo, and they had a great passion for a particular farming style, Shizen-nou (自然農 natural farming).

Shizen-nou is an ideology by which you do not plow the land or pull out weeds in the vegetable field. They do not use any chemical fertilizers, pesticides or herbicides. If the soil condition requires it, they only use oil cake or rice bran. Grasses and weeds are not pulled from the soil but are cut intermittently left on the soil where they had originally grown. They eventually decompose and enrich the soil.

Ken-san learned the method of Shizen-nou in Fukushima.  When the Great East Japan Earthquake happened in March 2011, the family moved from Fukushima to Okayama prefecture in search of a new place for farming. What was unfortunate was that the soil in Okayama was not well suited to the methods of Sizen-nou. According to Ken-san, “the soil in Okayama was just too hard… it was ‘Kachi-kochi (hard as a rock).” For that reason, the Takamatsu family decided to move from Okayama prefecture and, after the long search, they finally arrived in the Notsu region of Usuki City. Ken-san told me, “The soil here is good for the Sizen-nou method. We are able to grow many vegetables following the philosophy we believe in.”

I sensed great passion in him, and I really wanted to taste his vegetable. I was taken to take a look at one of his vegetable patches, and they were filled with a grasses. 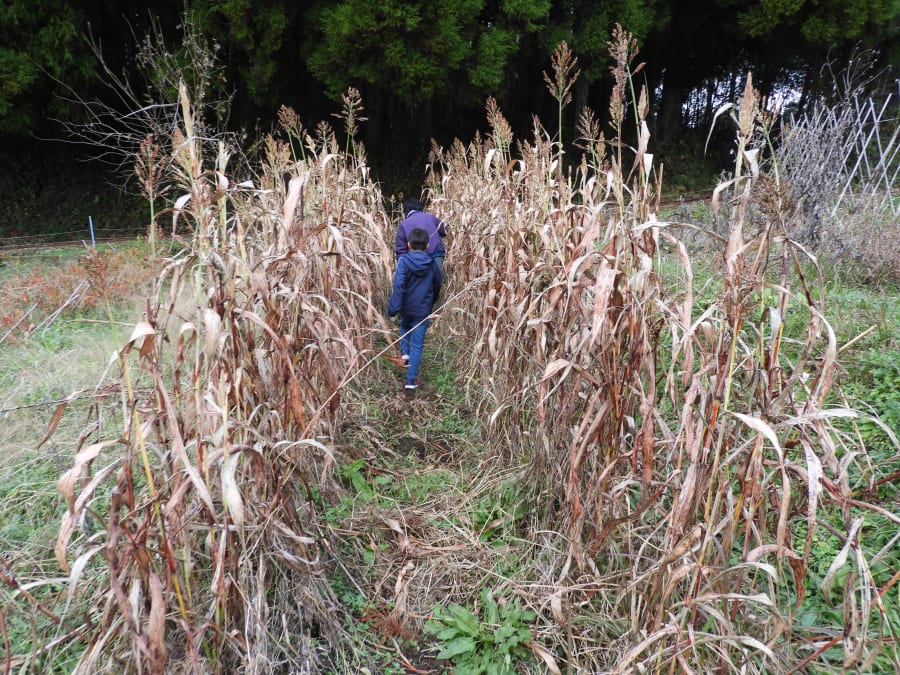 This feature of Shizen-nou means that the ecosystem of the soil is undisturbed allowing beneficial microorganisms to flourish. Today, I have a mission to dig up burdock (gobo), the popular root vegetable which is used in many Japanese households. 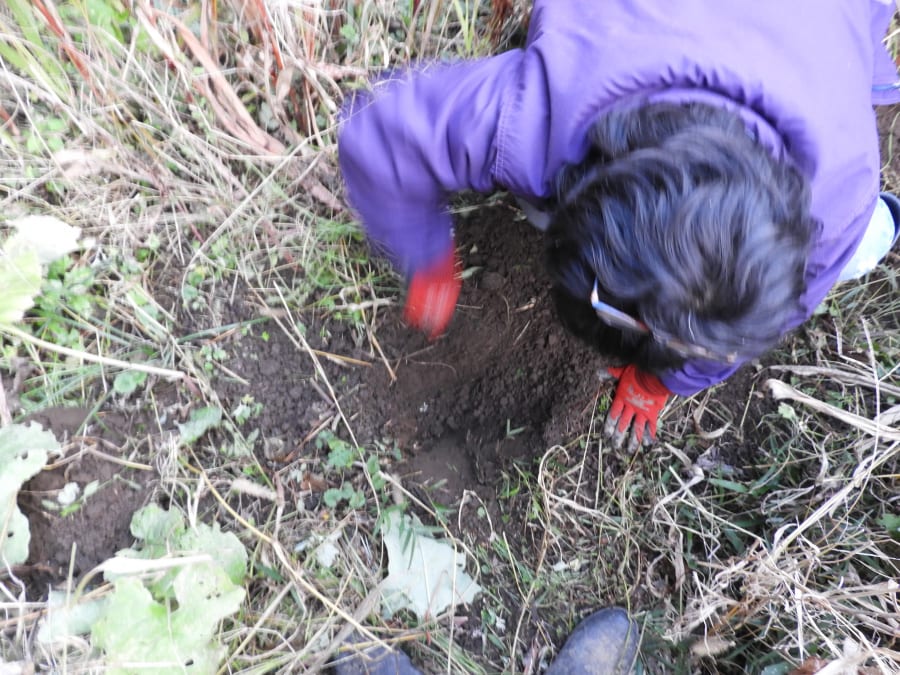 I entered the tall grasses and Mie-san and her son pointed out where to dig. If you didn’t look carefully, you would miss the small leaves sticking out from the ground. We dig and dig and dig and then pull out a length of burdock root! 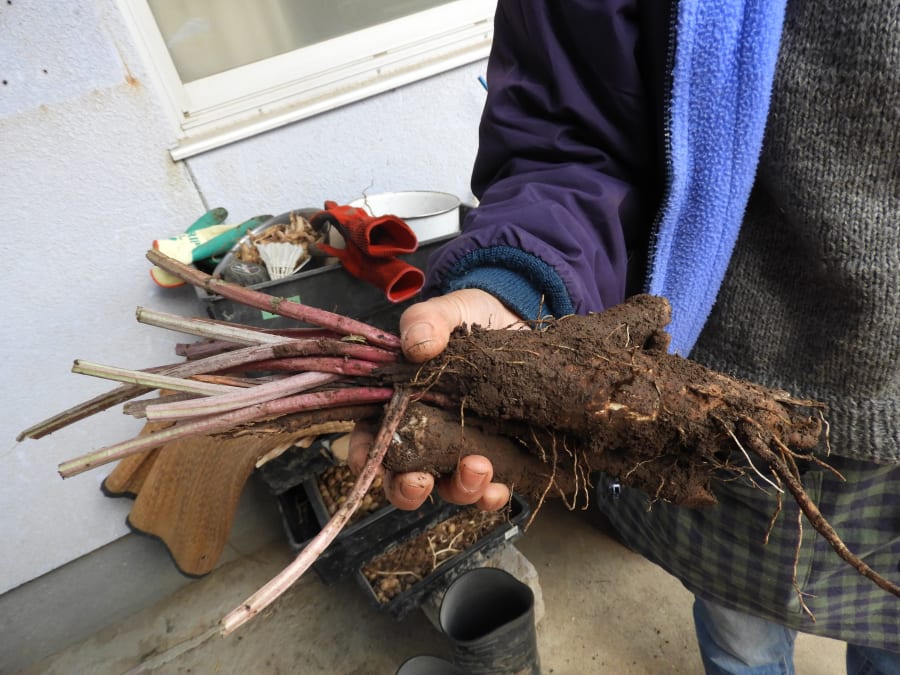 Today, we are using the burdock to make a dish called “Chimaki”, a mix with glutinous rice wrapped in bamboo or other leaves. It is actually a traditional Chinese dish (Zongzi), but became popular in Japan as well. We washed the burdock and Mie-san asked me to do sasagaki which means thinly slice the vegetable. When I was doing it, their son said “Let me do it! I wanna do it!” so we both did sasagaki together. 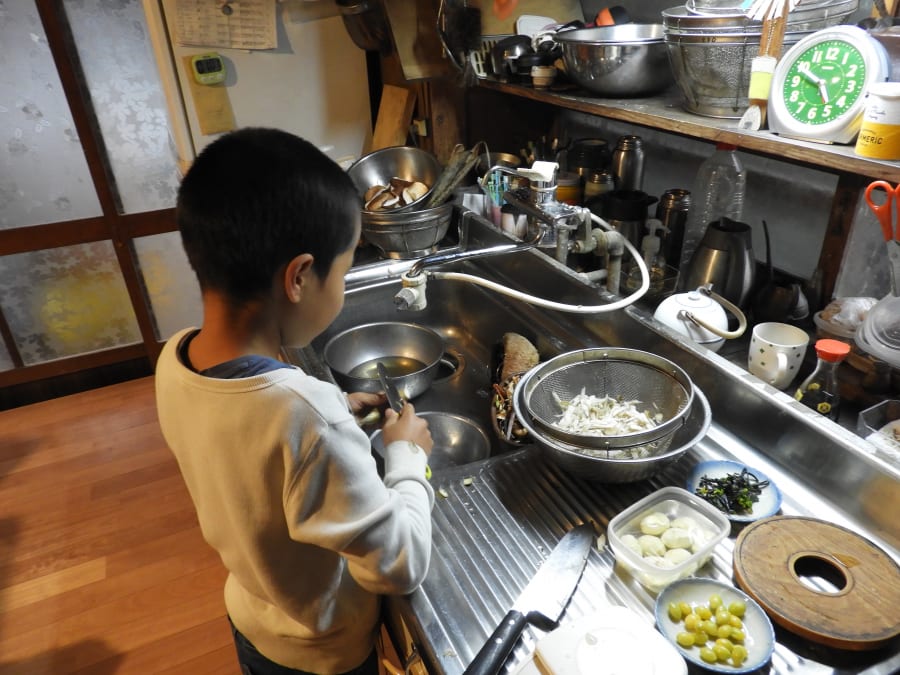 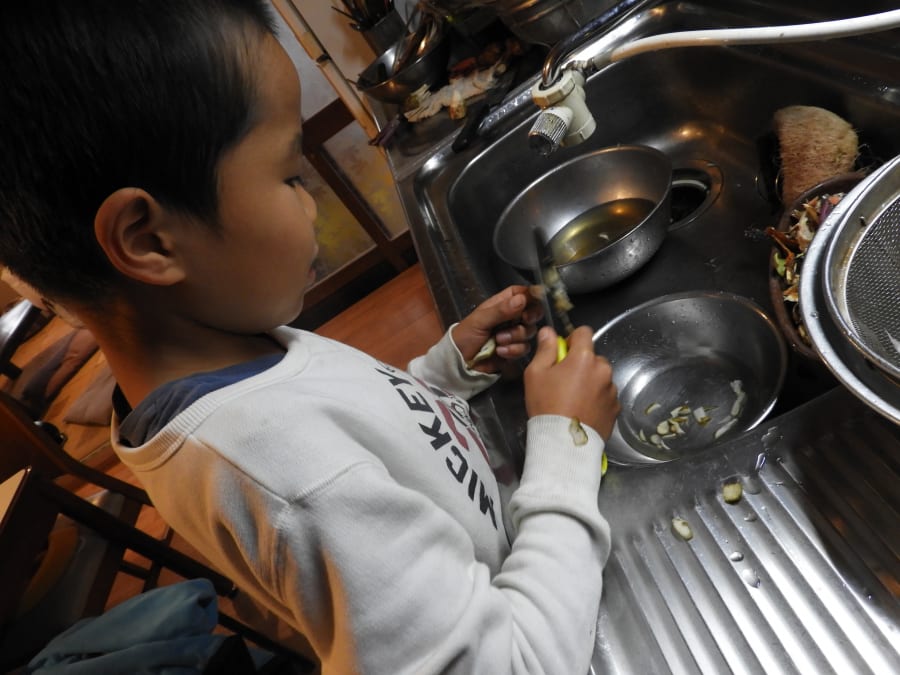 What I noticed was they were taking care to avoid any waste of the vegetables, and I thought by using the method of Shuzin-nou, it doesn’t produce as much as commercial farming style, so all the vegetables you harvest are very precious. We stir-fry the burdock, add glutinous rice and seasoning. Next we wrap the rice mix and chestnuts in bamboo leaves and put them in a steamer. A few minutes later it was done! 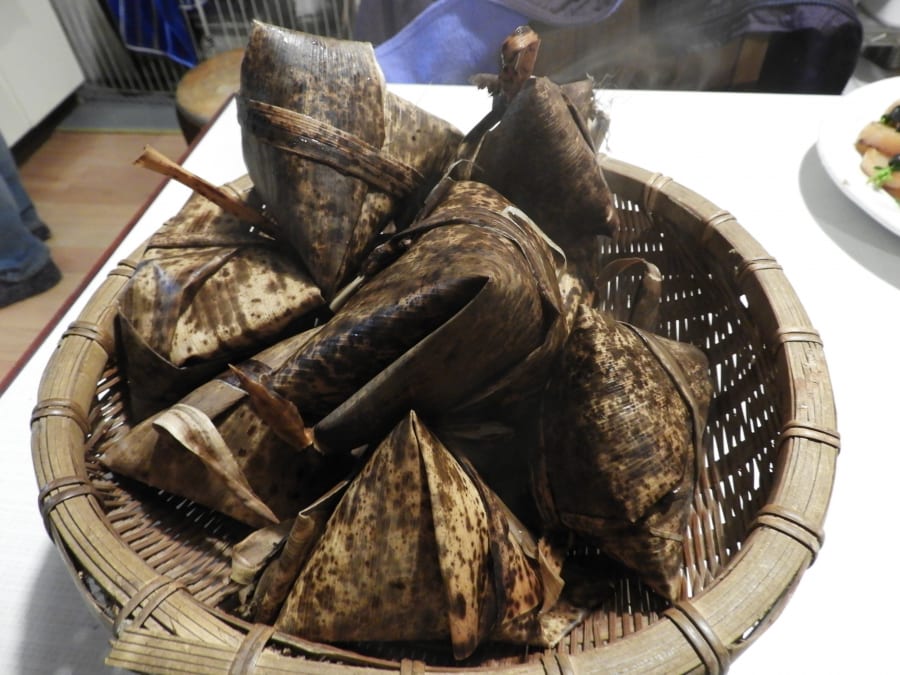 We had many other plates all different vegetable dishes almost all of which they had produced themselves. 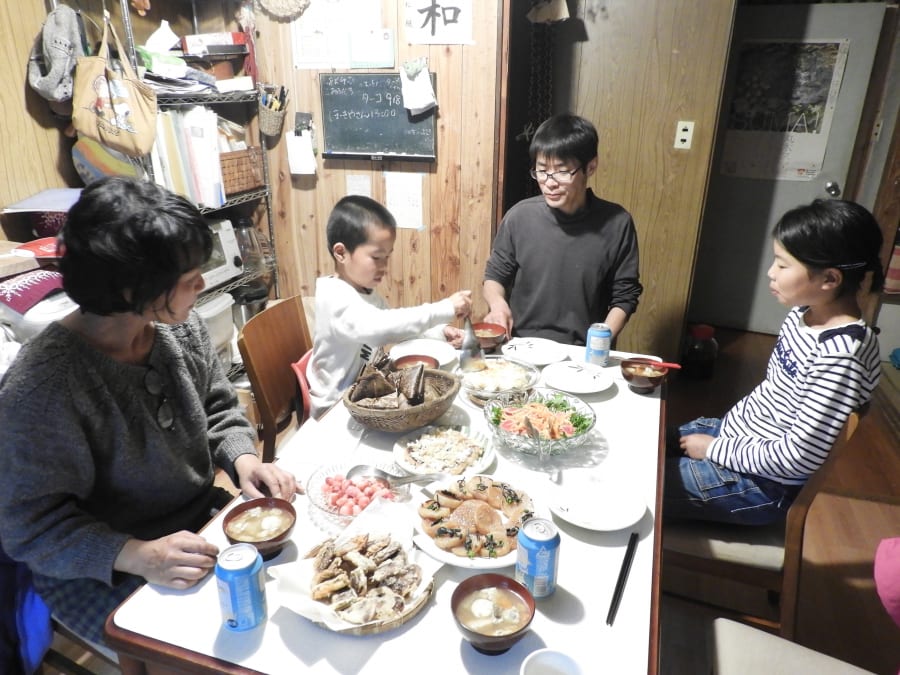 I am not a vegetarian and I thought, “Oh, no meat?” but their vegetables were all so much tastier than what I usually buy in the store, and the meal was very fulfilling! During cooking, I had noticed that all the seasoning ingredients they used were also high quality, so that was adding to the taste as well. I thought, “If you are vegetarian or want to have more vegetables in your diet, this is heaven.”

I also want to mention that the house here is more simple than “Obata no Ie.” There are many vacant houses in countryside, because of the aging society and depopulation of the countryside. There are many houses which are abandoned after the grandparents of household have passed away as younger people often choose not to come back to the countryside. The Takamatsu family, aiming for a simple lifestyle decided to live in not-so-perfect house, and renovate it as they need. The bathroom was undergoing repairs but was useable and what was best, was they use a wood fire to heat the bath water. I felt it warmed me much more than bathing in a regular bath. Facilities here are simple, but what they provide and use for everyday life are carefully selected based on their philosophy of simple living.

Before I go to bed, Mie-san provided me with something called a “Yutanpo”, a kind of hot-water bottle to put in-between the futons. By doing this, you don’t feel the cold while you are sleeping. I was told that since the house was very cold, to use the heater as much as I wan but I felt that they were trying to save energy, not to save a money, but to save the earth. So, I tried not to use the heater and I was warm enough to sleep comfortably!

The next day, after I woke up, I went to the cage which houses the hens to collect eggs. 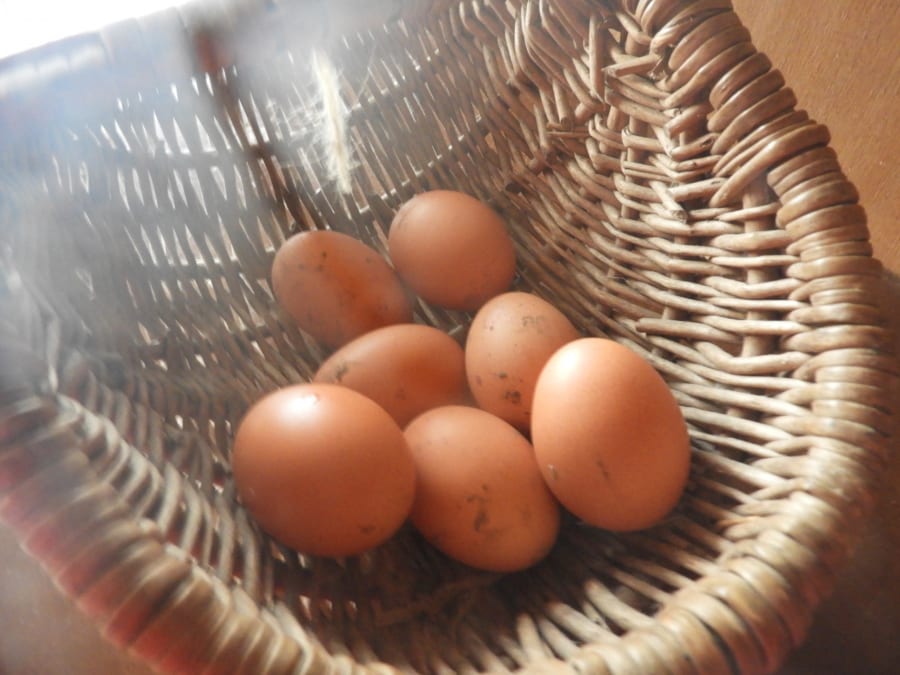 I was told by Mie-san that the feed they give their hens is rice bran (which they produce) and some damaged vegetables from their field. Again, it is all self-sufficient. I was served Udon noodles for breakfast and used a fresh egg and a little soy sauce as a dipping-sauce. The egg had intense and deeper taste so, even though it was a simple dish, I got so much satisfaction from eating it. 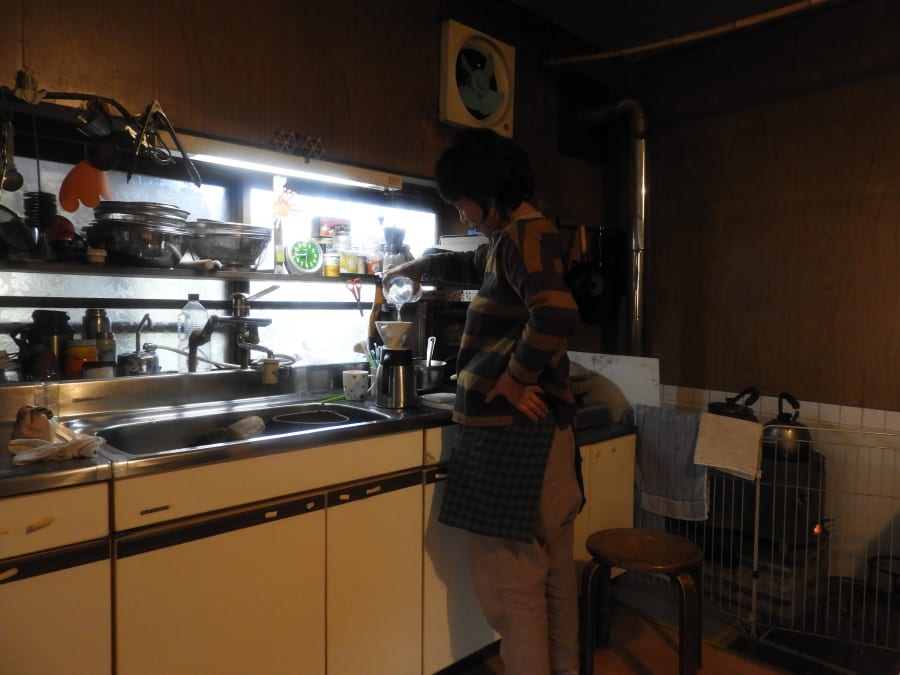 Having a coffee with Mie-san, I thought that this place is really special and if you can appreciate a simple lifestyle high quality vegetables, there is no other place which could beat it. It was different to the experience I had had at “Obata no ie”, but I felt I was lucky to stay at “Soyofuku Noun” with the Takamatsu family. 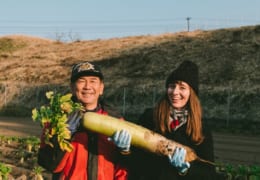 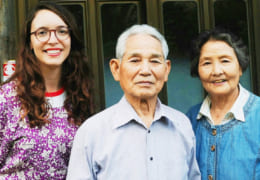 A Farm Stay in Bungotakada, Surrounded by Rice Paddies

Posted by Voyapon November 15, 2017 Sponsored by Tourism Oita A Night at a Home-stay on Kyushu Island Experien […] 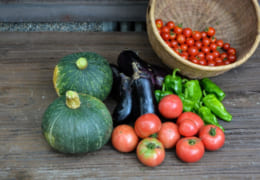 September 3, 2017 After visiting Usuki known for its castle, its samurai streets, and the Stone Buddhas carved […]