英語  Things to do  Sightseeing

Charge power at Higashi Shiiya water fall! ～ From Beppu go to the waterfall with a dragon～

In order to reach Higashi Shiiya waterfall, we drove 20 km on a local road from Beppu city in Oita prefecture. After passing by a humongous mammoth monument on our right, there’s only 6 km left to an obvious signboard indicating the last turn we need to take for reaching our destination.

As we take the turn into a rural road with well looked after rice terraces on both sides, we also see a tiny little Shinto structure on the left, namely Kumano Shrine. There’s not much to see in its precinct, for the reason that archaic simplicity and nature admiration is what Shintoism congratulates.  In fact, just two large evergreen Asian Oaks, Quercus gilvas, are standing in guard for the shrine bringing forth its uncomplicated, yet majestic aesthetics.

Well.., let’s not detour too much away from our real destination and resume our road to Higashi Shiiya waterfall.

As we follow the road for another 10 minutes, we see a sign ‘Free-parking’, with a note underneath, ‘only if you eat in’. But as it happens you can find an unconditional parking lot just above this place for 300 yen!

We paid the fee to this middle aged man at the car park, he said, “Take walking sticks!” I got baffled if he was questioning our walking abilities. “No worries!” I replied in a vigorous manner nevertheless and started taking my steps towards the small trail leading to the waterfall.

Soon enough into the path, I deeply regretted for rejecting the man’s offer.

The path in the canyon is narrow and very slippery with mossy vegetation running rampant with an aid of humidity coming from mists sprayed constantly from the waterfall.

Looking down deep-green pools of water whirling around next to such path gives me a shiver, and I carefully take every little step while indulging in a childish fantasy like ‘Kappa’ the Japanese mystical amphibious imp living in a place exactly like this.

As we get closer, the stream flowing calmly just a while ago has changed its appearance, now gushing through the rocks and splashing water all around the place!

Drawn in by such incredible movement of the current, I look around and also notice a small, calmer flow of pool where a group of small insects are quietly flying and hovering over.

“Now I can’t wait to see the waterfall!”

We kept walking deeper into the canyon and begun to see a magnificent pillar of water in the distance.

I am not sure what grasped my mind first; the strikingly divine profile of the waterfall or its tremendous plummet sound?

On the spur of the moment, we look at each other, “No doubt a white dragon resides here!” Such belief was told by our acquaintance earlier.

I go even closer to where the wind blows its misty splashes right towards me.

Looking up, 85 meters in height with a beautiful vertical fall without a break, looks as if the dragon is plunging down from the sky with its white claws spread wide in forms of splashes on the rocks below.

Surrounding the deep basin excavated at the foot of the fall, rock cliff rise high above with an ambience of forbidding any men from approaching.  Still, I see some trees have managed to find their ways to survive clinging onto this rugged cliff wall…

I promised myself a return in the season to cherish the scarlet‐tinged Japanese maple trees.

Then I became aware of a friend climbing onto a massive round boulder, gazing up the waterfall and meditating.

I saw another struggling and slipping on wet surfaces of rocks in an effort to get closer to the fall. He seemed eventually accomplished his goal, yet he was drenched by the time he completed this dangerous exploration.

I simply relished the mighty sound and spectacle of the waterfall with my feet dipped in its plunge pool.  I could forget the lapse of time here contemplating and quietly adoring its beauty. Even so, feeling very sorry for a drenched friend chattering teeth, soon enough we decided to head back. 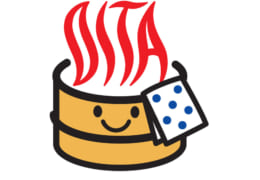 A lot of Fun in oita!! You can meet nice people , tasty foods , beautiful spots and good experience in OITA. V […] 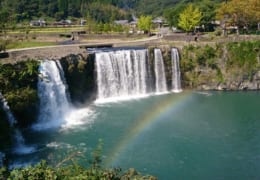 The Mt. Sobo, Mt. Katamuki and Mt. Okue mountain region that spans from Oita to Miyazaki is full of beautiful […] 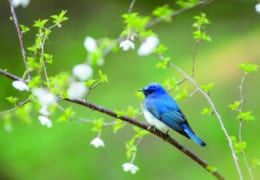 Walking and Hiking Oita is the best way to see beautiful landscapes and to see local areas. Let`s grab a pack […]

Travel back in time to ancient Japan experience plan
1105 view

Travel back in time to ancient Japan experience plan
754 view